Slumber Sleep Aide CBN softgels are designed to promote deep and restful sleep. Their hemp-derived CBN is powered by nature to help you maximize relaxation and tranquility at night, for a better day tomorrow.

Use alone, top off your favorite CBD product or with a complementary sleep aid as such as Quicksilver Scientific Lipocalm or Melatonin or Designs for Health Insomnitol.

20-60 Day Supply, based on your preferred CBN dosage

Most cannabis plants only produce between 3-5% of CBN, making it very rare. As the French saying goes, “Tout ce qui est rare est cher” (means “All that is rare is expensive”). To most people’s surprise, CBN is up to 20 times the cost to produce vs. CBD! As such, it could be considered as the new gold of the cannabinoids!

What is a rare cannabinoid?

What is a minor cannabinoid?

According to the scientific discoveries so far, the cannabis plant (a general term for many different species, among which the well known hemp and marijuana) contains more than 110 different cannabinoids and 120 different terpenes.

Minor cannabinoids are defined as any and all cannabinoids from the cannabis plant other than Δ 9-tetrahydrocannabinol (Δ 9-THC). 1.

According to the definition stricto senso, CBD could be considered as a minor cannabinoid. But with the recent development and growth of CBD research, the cannabis industry most commonly refers to CBD as a major cannabinoid, given the high level amounts that can be found in some strains nowadays.

Apart from CBD, the up-and-coming minor cannabinoids in the spotlight are: CBG, CBC, CBN.

Initial research is very promising, showing many potential, yet different, benefits from each of these different minor cannabinoids.

The main and distinct difference between the known minor cannabinoids and Δ 9 THC is Δ 9 THC has a distinct psychotropic effect. Many may suggest that a lack of the “high effect” in these minor cannabinoids is a major added value for cannabis researchers and product users.

The future of minor cannabinoids

According to Visual Capitalist 3, the future of minor cannabinoids is very promising due to their potential in pain relieving properties and other various medical applications.

However, we are only at the beginning of the discovery of the incredible potential of minor cannabinoids. A great part of unknown still remains and further research is needed to explore even deeper these incredible natural compounds.

Why is CBN so unique?

According to research, CBN has shown to have this particular sedative and “sleepy” effect hasn’t been in other non-psychotropic cannabinoids studied thus far.

Furthermore, it seems that CBN is building a reputation to help in treating various skin conditions such as: dermatitis and various bacterial infections. It has also been hypothesized, CBN may even be able to fight infections such as MRSA (Methicillin-resistant Staphylococcus aureus). Another notable study, has also shown benefits of treating glaucoma in a non human research experiment(4).

The future of CBN appears to be very promising…

Please note all of the above are only results of observations of articles and researches and do not constitute claims of any kind.

This product contains less than 0.3% THC.

Take a desired amount depending on your sleep needs. We recommend take 1 serving (2 softgels) orally 1 hour before bed each night. Simply take with water and swallow.

Use alone, top off your favorite CBD product or with a complementary sleep aid as such as Quicksilver Scientific Lipocalm or Melatonin or Emerald Health Endo Sleep. 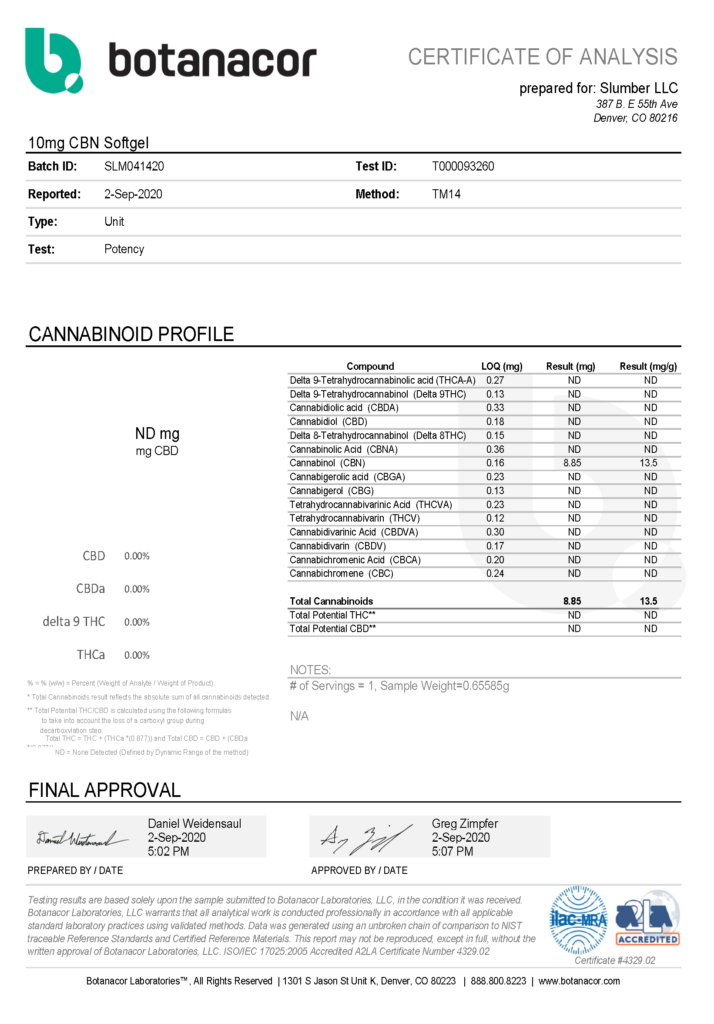 We have launched a new fundraiser for Leaf411 to kickoff 2022!